ENCOUNTERS WITH THE UNKNOWN 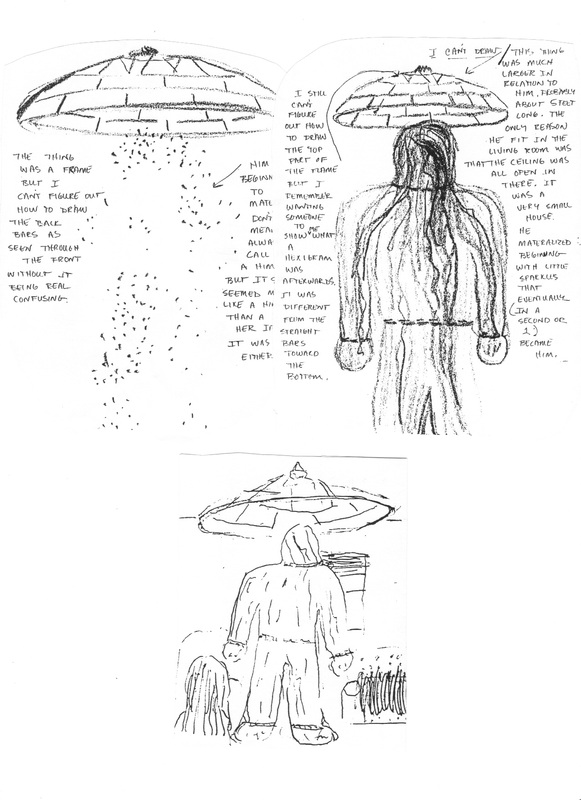 This account first came to my attention in  January, 1994 and involves an encounter that took place in south Leon County in the fall of 1989. After conducting several interviews by phone and in person with the witness, it is the feeling of this investigator that she is sincere in relating her account of what she experienced. What follows is a description of what happened in her own words.
"I had what I recall to be my first UFO experience in the fall of 1989. I was living in a little house at the edge of the Appalachicola National Forest in Tallahassee, Florida. I spent a lot of time walking down the road that led into the forest and visiting the lakes back there. I had always been fascinated by the idea of UFOs and had even checked out four or five books from the library shortly before this experience, though I never really expected to see one. For some reason, I got more than I bargained for!
One night I woke up in a slight panic, something was going on. When I opened my eyes I saw a red beam of light shining in the window next to where I had been sleeping. It was moving around like a searchlight might. I jumped up to look out the window. My first thought was, 'This is it.'. It was not an airplane, or a helicopter, but unmistakenly a UFO. My second thought was, 'Run!'. I ran as far as the opposite side of the room where I crouched down near the floor with my back against the wall. I guess I thought I'd be safer inside than out, after all, the UFO was outside---but not for long! As I looked up at the window, a small ball came flying through it. It made a little dip then flew toward the ceiling. As it flew, it emerged into a dome-shaped framework about 5 feet across, composed of grayish looking bars with a small apparatus of sorts on top. Then it stopped suddenly and tilted slightly toward the ceiling. I started seeing sparkles of light under the frame. These sparkles became more numerous until in a matter of about three seconds a being was formed. This being, I assume it was a being only because it had a human shape, was approximately 8 feet tall, entirely covered by a brownish-tan cloth, and had ties around his neck, waist, wrists and ankles. Needless to say, I felt I had seen enough. Just then I got the message, telepathically probably, 'He is going to reveal himself' and luckily for me at the time that's all I remember except that everything went black. I could still see but there was nothing to see...no being, no room...nothing. My next memory is being in the process of getting up off the floor. It wasn't until I was halfway up that the lights came on again--reality, that is. Suddenly the world was back! I stretched and yawned, remember feeling pretty good and said to myself, 'I think I will go back to bed now'. I laid in bed maybe 15 or 20 minutes thinking very calmly about what had just happened, like it was the most normal thing in the world. I told myself that the next day I would go check with my neighbors, surely, they had to have seen the UFO, but I never got the chance to do this because the next time I remembered this event was about 2 years later and I was living in another part of the city! That's what happened--it was the most remarkable thing that had ever happened to me in my life and I wouldn't trade it for anything!"

This next case first came to my attention in 2001 and involves possible abduction scenarios/encounters with reptilian beings and greys. The experiencer is a female from a southern state who claims encounters with entities since childhood. 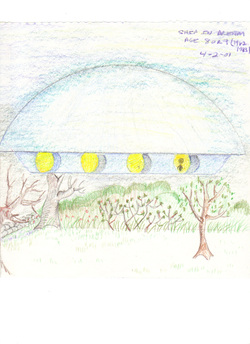 "As a child I remember having a very vivid dream of a spacecraft hovering in my back yard. I remember waking up and saying to myself that it seemed so real. I was about 9 or 10. I now think there was much more to the "dream" but I can't remember." 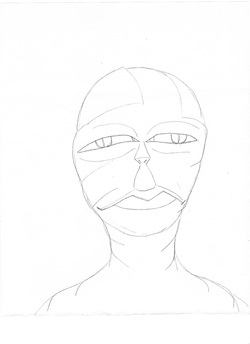 "After my hypnotic session with the psychic where I saw an image of a reptilian being, I became compelled to draw him. I feel such a strong affinity with this being even though I have read that they are not very nice. In spite of all that, I feel that this being had protected me (as much as he could given what had to take place) and developed a true affection for me or at least an appreciation for my sacrifice for the "cause", even if it was forced. I believe that this being has been with me for a very long time and even directs me unconsciously. I have a difficult time knowing what is truly "my" choice and choices that have been made for me. All I know is that I have also had a powerful sense of duality. I know not why I am directed or what the purpose may be, only that I sometimes feel that my physical form is being used by some other entity." 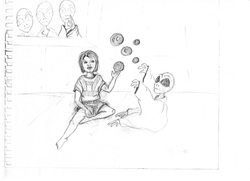 "In this drawing, I'm sitting with an alien child which is being observed by adult alien beings. They are interested in how we interrelate. I'm feeling inferior because I can't levitate the spheres as can the alien child. However, creating competition was deliberate in order to "push" me to use psychic talents they know I have."

a meeting with the grey 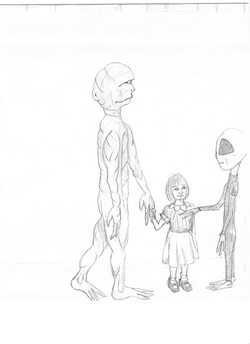 "I saw this scenario while working with the psychic. I felt that it was one of the first times that I was introduced to the greys, however, the reptilian had some involvement with me prior to this meeting. This reptilian creature could very well be the alien playmate that came to me in the bathroom. I don't remember ever seeing him in the bathroom for it was a "mind" thing . However, I feel that I knew him and interacted with him before this scene with the grey. I don't know where the triangle comes in, I just saw these greys as more military than others that perform examinations. I was being brought to the greys by the reptilian and these particular greys were the first line of defense or screening. I was about five years old in the drawing."